Something happens between the the time I finish making a card and the time that I actually start to think about addressing the envelopes and sending it out – it’s called the entire month of December. Maybe this frozen motivation is because I’m just too darn tired from last night’s holiday party to stand in line at the post office? Maybe it’s because everyone seems to move around so much and I just can’t keep up with ever-changing physical addresses? Whatever the case, for everyone that I intended to get this card to but failed, Happy Holidays!!! 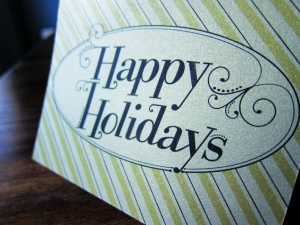 Too bad too, because the photo doesn’t do the sparkly gold paper or the velum lined inside a lick of justice.

Poster for the amazing one-man show by Jimmy Radosta.

Pink? Ok, it’s honeysuckle. But most any shade of pink is usually quite the design challenge for me. In 2011, my resolution will be to, as Pantone suggests, “Let the bold spirit of Honeysuckle infuse (me), lift (me) and carry (me) through the year.”

Pantone 2011 Color of the Year

I hope the appropriated content actually holds up to the same level of awesomeness.

Hood River room with a view 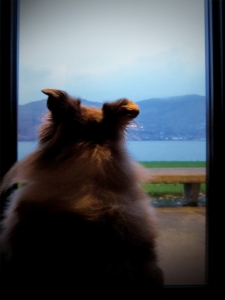 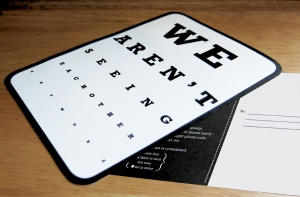 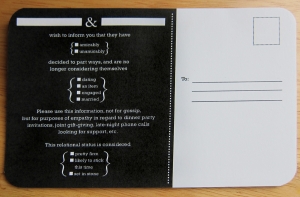 Any decent R&B song will tell you – splitting up with your sweetheart (or not so sweet)  is tough stuff. The last thing you need to endure is the relentless questioning from friends and family. But you also don’t want to risk running into your ex at a party or event where the host was unaware of your separation and invited both of you. Breakup notices deliver this message for you succinctly and stylishly. Just check the appropriate boxes, address to receiver, apply postcard stamp and off they go! Now, just don’t answer your phone.

yes, even in this economy 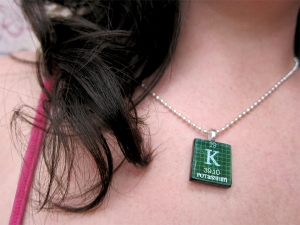 is what I’ve been saying a lot. It’s when I tell folks that I recently left my salaried/benefited position as a senior graphic designer in lieu of the unpredictable, potentially poverty-making world of freelance. It’s when I need to explain that I wasn’t forced to do this due to a layoff; it’s just that I’m hungry for a different design story.

It might also be because I realized I’d already traversed a few of the 12 steps in Milton Glaser’s  The Road to Hell (I’m not sayin’ which ones. But definitely not No. 12. Or No. 11.)

So yes,  even in this economy, armed with a lap top and incredibly encouraging circle of friends and colleagues, I left my comfortable 9-5 gig to start Potassium Design.

*Potassium symbol necklace (which is double cool because it’s on the back of a scrabble tile) was given to me by the always thoughtful Stacy Dutton. 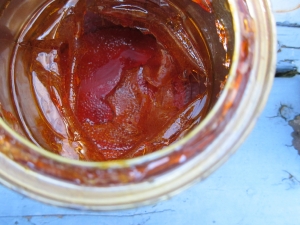